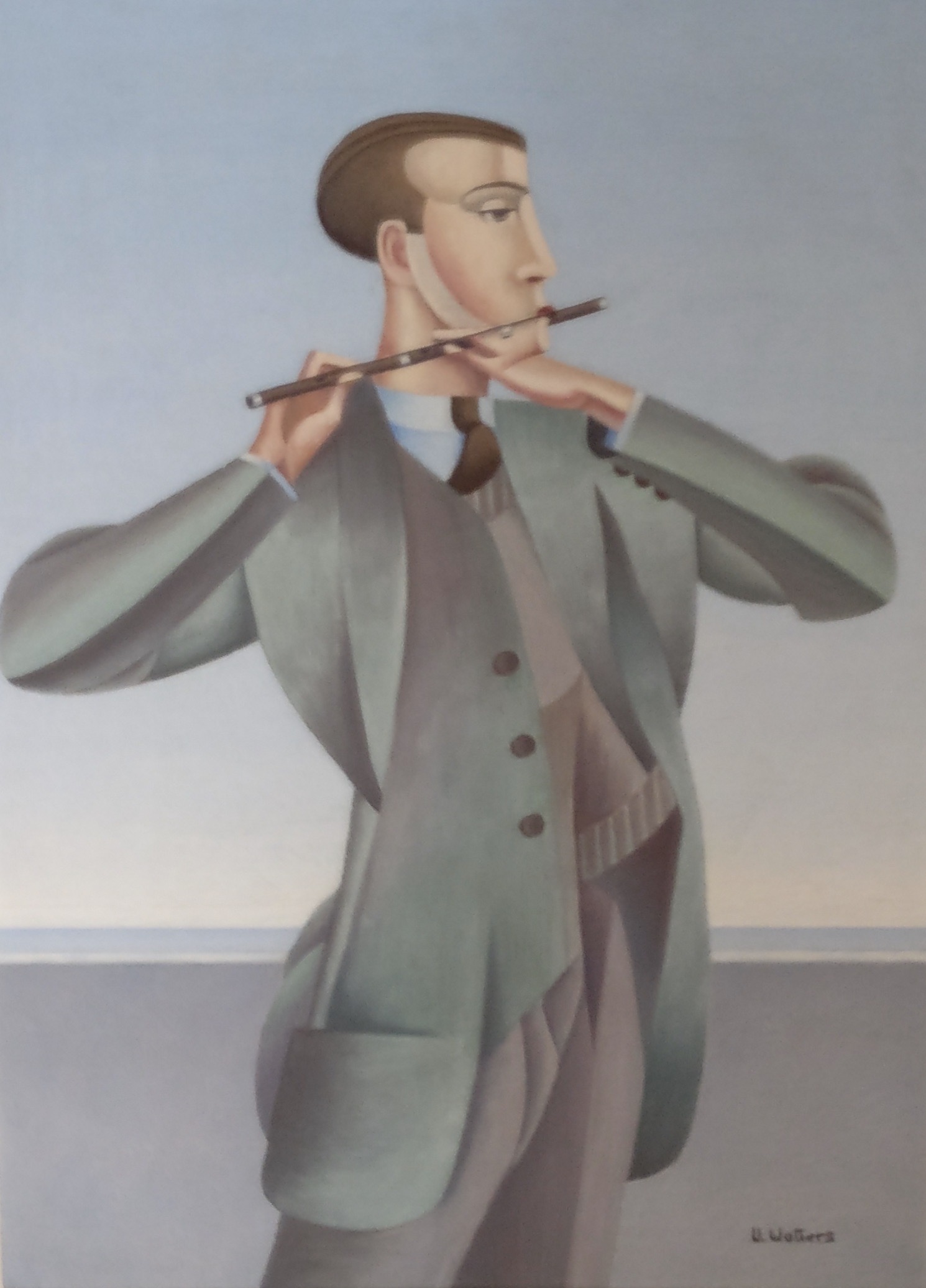 The Greek god Pan, or a close study of a musician? Either way, it’s the colour that enchants in this 1953 work.

Una Watters’ Flute Player (oil on canvas, dimensions unknown) is another of those works that has travelled in the world under an alias. Listed in the 1966 posthumous exhibition catalogue as Fluteplayer,  the painting is known as Pan by the family to whom Eugene donated the work after Una’s untimely death.

This may have been Eugene’s title for it, but either way the allusion is clear; the subject of the painting is a whistleblower. (The pencil-thin instrument he plays seems too small to be a standard flute; it looks more like a piccolo.) This is one of Una’s most elegant compositions and it’s easy to see why this idealised figure might have been mistaken for a Greek god, although Pan’s reputation is distinctly hedonistic whereas this young man is much more refined.

To the Greeks, Pan – god of the natural world – was a shepherd, half-goat, half-man. He played the pipes and was lusty in his appetites. He was, apparently, the favourite god of the Greek people. In Una’s work the flute player seems to be placed outside – rather than in a smoke-filled bar – perhaps a nod to the god of nature? This “Pan” is standing on what seems to be a wide open strand with only the far distant and very low horizon (or shoreline?) to give us our bearings. (See also Una’s Girl Walking by Trinity in the Rain for a similar low viewpoint.)

Fluteplayer is a three-quarter, highly stylised portrait, in which the body is viewed straight on but the head is seen in profile, catching the typical sideways stance of a flute player. There is little suggestion of effort in this graceful portrait bar the thin pale band sweeping from the musician’s sideburn to his chin and seeming to meld with his very balletic fingers. This application of paint to supply gesture is a technique Una used often.

His prominent upper lip clamped to the flute’s tone holes is the only other evidence of exertion. Otherwise, the musician’s face is quite bland and impassive – neat hair carefully combed, an unexpressive eye. So perhaps it’s not a particular player Una has in mind but a generic portrait of a man who’s defined by his instrument, someone who has become one with the music.

If his personality is communicated at all it’s by his clothes. At first glance, this reads as a static portrait of a stylish traditional musician sporting a three piece suit, collar and tie. However, on closer scrutiny, we see that the rendering of the clothes is full of movement.

Here is where the musician’s personality resides. His jacket is actually fluid, the tails literally dancing. The lapels are serpentine and the jacket seems to morph into a waistcoat, or is he wearing a sleeveless jumper underneath? Or is it the lining of his jacket that appears to swing to the music being played? This cubist-style capturing of overlapping actions and the subtle use of shadow give the work a subterranean energy, while the surface is preternaturally calm.

The colour palette is delightful – a mix of delicate blues, a heathery purple and dove grey. Details such as his slicked-back hair, the trio of buttons on his jacket sleeve and his tie are picked out in a rich brown. But the overall tone is cool, Zen-like, an almost meditational serenity.

Mary Morrissy curates this site. She is an award-winning novelist, short story writer and journalist. She has taught creative writing at university level in the US and Ireland for the past 20 years, and is also an individual literary mentor.

4 replies on “The Whistleblower”

I wonder, Mary, did Una have someone specific in mind – Seamus Ennis? Someone in the Radio Eireann Symphony Orchestra?

She may well have, Brian, though I’m thinking if she was using Seamus Ennis as a model, would he be more likely to be depicted playing the uileannn pipes?Perhaps someone out there – friends of Una’s or Eugene’s – might know? Comments welcome here or DM me through the site.

I love the beautiful colours and shadings in this painting of a very stylishly dressed musician. Perhaps he is playing to his family and friends, A “live performance”, something we are all missing these days. However, we can hope for better days ahead for us and for all the music makers.

Amen to the notion of a live performance, Maura. And isn’t this musician well togged out!